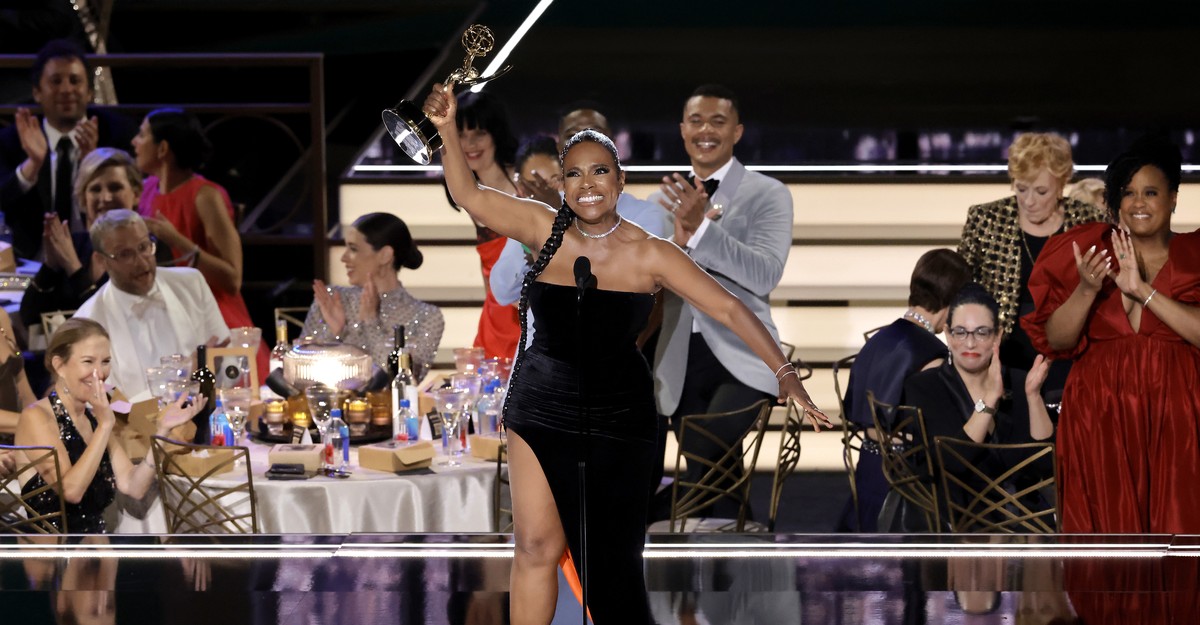 Nothing against all of the other Emmy winners tonight, but even the most perfectly rehearsed, elegantly delivered acceptance speech couldn’t possibly compare to Sheryl Lee Ralph’s moment in the spotlight. In the minutes after the actor won Outstanding Supporting Actress in a Comedy Series, she sang and beamed and soliloquized, inspiring the audience to leap to their feet again and again—and again.

Her acceptance speech was the kind of moment television—live television, in particular—is made for and needs more of. Ralph was a joy to watch from the moment she stepped on stage: A Broadway star through and through, she took a deep breath at the mic and then broke into song, belting Dianne Reeves’s “Endangered Species” and enunciating each line with the passion of a soloist performing her last show. Then, when she moved on to the list of people she wanted to thank, she didn’t just rattle off names and networks to acknowledge. She transformed her speech into poetry, her emotions into a rhythm that struck a chord with the crowd.

“To anyone who has ever, ever had a dream and thought your dream wasn’t, wouldn’t, couldn’t come true, I am here to tell you that this is what believing looks like, this is what striving looks like, and don’t you ever, ever give up on you,” she said, “because … if you get a husband like mine in your corner, if you get children like mine in your corner, and if you’ve got friends like everybody who voted for me, cheered for me, loved me…” She doesn’t complete the sentence, but the sentiment is clear: Ralph is infinitely grateful, and everybody knows what she means when she chants her thank yous afterward with her trophy in the air.

But it wasn’t just the speech itself that made Ralph’s win so brilliant. Ralph is a respected performer who has been waiting decades since her start in the late 1970s to be recognized on this kind of mainstream level. Many in the room, as soon as her name was called, seemed to understand how overdue her recognition had been, giving her a standing ovation even as she seemed too overwhelmed to leave her seat. And her win couldn’t have been for a more fitting role: On Abbott Elementarythe comedy about an underfunded public school, she stars as Barbara Howard, a teacher whom the protagonist, played by the show’s creator Quinta Brunson, admires and considers her mentor. Barbara is a trailblazer; Ralph is the same.

Making live-TV magic has been a challenge for awards-show producers. Some rely on celebrity cameos, hoping to generate headline-making chatter. Some fill up the hours with comedy bits, attempting to create a viral clip or meme in the process. Some have to deal with unpleasant surprises that show the pitfalls of doing anything live. Tonight’s ceremony featured more planned moments than unplanned: Some, like the reunion of Kenan Thompson and Kel Mitchell, were delightful, while others, such as the dance-heavy intro, were just awkward. But Ralph’s speech was the kind of showbiz alchemy that can’t be manufactured. The Emmy producers appeared to understand that: They captured her stunned reaction along with every ovation, and never played her off as she spoke. They zoomed out, offering wide shots of the room, because that was how electrifying Ralph was: Her energy radiated into every corner—and straight into the screens of those watching at home.