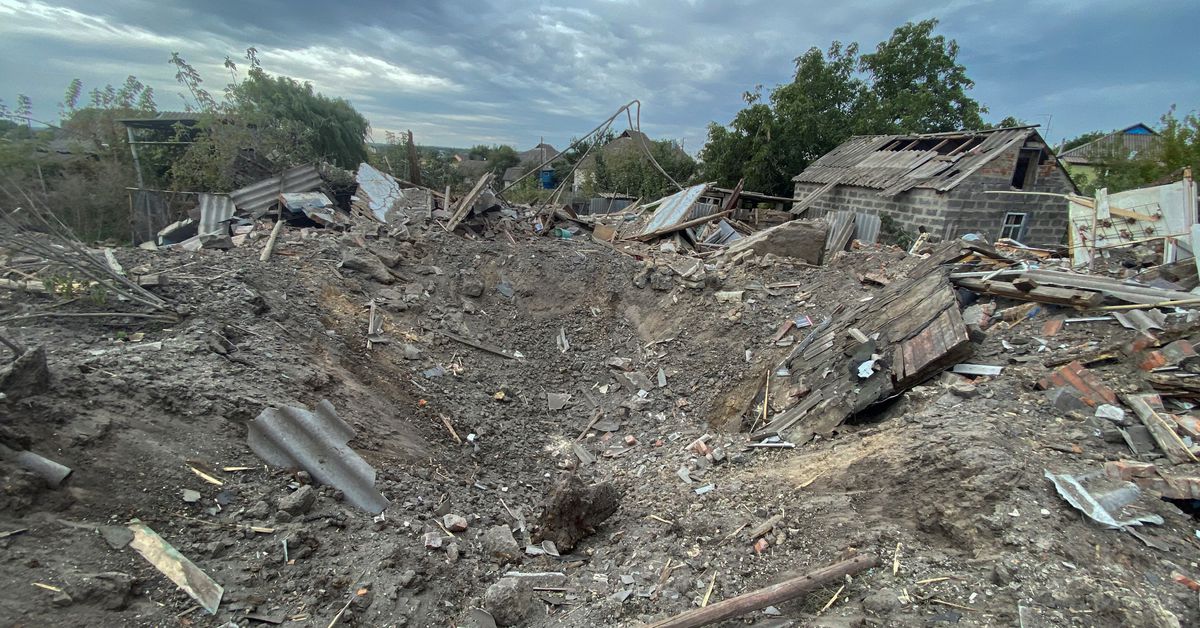 A view shows a shell crater left by a military strike in the town of Balakliia, recently liberated by the Ukrainian Armed Forces during a counteroffensive operation, amid Russia’s attack on Ukraine, in Kharkiv region, Ukraine September 11, 2022. REUTERS/Stringer

LONDON, Sept 12 (Reuters) – Faced with one of its worst defeats in nearly seven months of war in Ukraine, the Kremlin insisted on Monday it would achieve its military goals and President Vladimir Putin maintained an air of business as usual as he chaired a meeting on the economy.

Kremlin spokesman Dmitry Peskov declined to answer directly, when asked by a reporter if Putin still had confidence in his military leadership after Ukraine’s lightning counteroffensive in the northeast of the country.

Instead he repeated a familiar mantra. “The special military operation continues. And it will continue until the goals that were originally set are achieved.”

Soon afterwards, Putin was shown on state television chairing a meeting on the economy at which he made no reference to the rout and said Russia was holding up well in the face of Western sanctions.

“The economic blitzkrieg tactics, the onslaught they were counting on, did not work – this is already obvious to everyone, and to them too,” he said.

Seizing the initiative after months of deadlock, Ukraine says it has recaptured more than 3,000 sq km (1,160 sq miles) of territory in the space of just a few days. Russia, however, still occupies about a fifth of the country.

Asked if Putin would order a general mobilisation in response to Ukraine’s counter-offensive, Peskov referred the question to the defence ministry, which did not reply to a Reuters request for comment.

So far Putin has not resorted to mobilising Russia’s reserves, who number around 2 million men with military service within the past five years.

To do so would constitute an admission that what he has cast as a limited military mission is in fact a full-scale war against a fellow Slav country – and that the war is going badly for Russia.

The swift Ukrainian gains in Kharkiv region have left Moscow facing its most serious defeat since being driven back from the outskirts of the capital Kyiv in the spring. The advance has deprived Russia of vital logistics hubs it had used to supply its forces in eastern Ukraine.

Moscow’s public insouciance about the retreat has provoked significant anger among some pro-war commentators and Russian nationalists on social media.

As Russian forces abandoned town after town on Saturday, Putin was opening Europe’s largest ferris wheel in a Moscow park, while fireworks lit up the sky over Red Square to celebrate the city’s founding in 1147. read more

Chief writer on Russia and CIS. Worked as a journalist on 7 continents and reported from 40+ countries, with postings in London, Wellington, Brussels, Warsaw, Moscow and Berlin. Covered the break-up of the Soviet Union in the 1990s. Security correspondent from 2003 to 2008. Speaks French, Russian and (rusty) German and Polish.