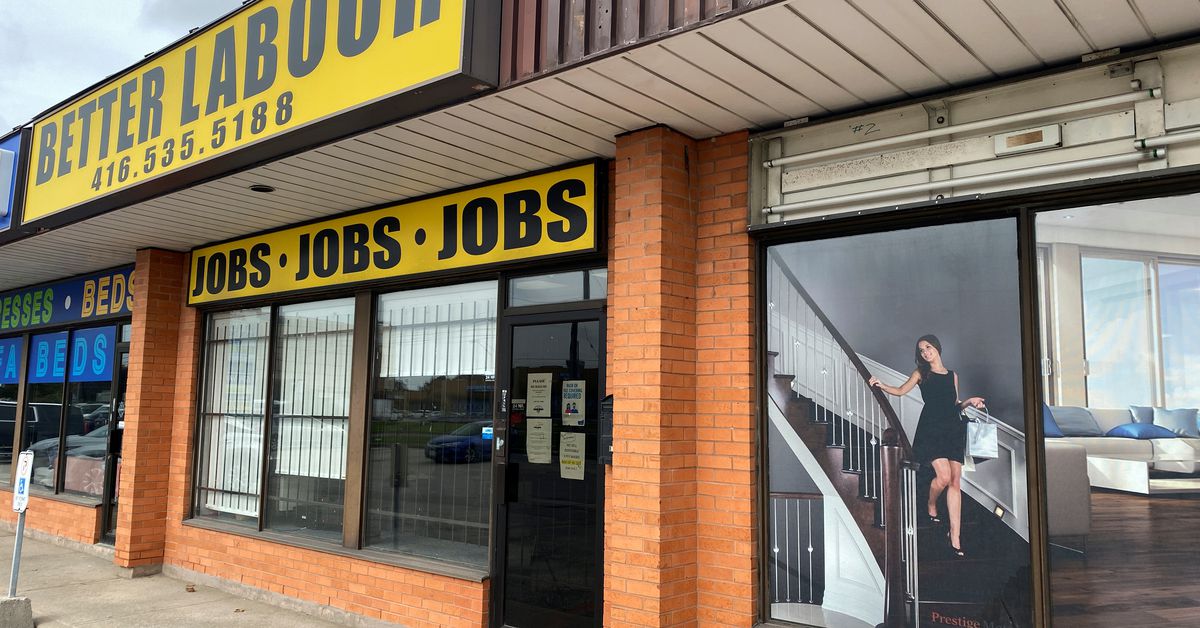 OTTAWA, Sept 11 (Reuters) – More than a year after the Great Resignation took hold in the United States, Canada is grappling with its own greyer version: The Great Retirement.

Canada’s labor force grew in August, but it fell the previous two months and remains smaller than before the summer as tens of thousands of people simply stopped working. Much of this can be chalked up to more Canadians than ever retiring, said Statistics Canada.

It is not just the 65-and-over crowd packing up their offices and hanging up their tool belts. A record number of Canadians aged 55-64 are now reporting they retired in the last 12 months, Statscan data shows. (Graphic: https://tmsnrt.rs/3RVXvNM)

“We knew from a long time ago that this wave was coming, that we would get into this moment,” said Jimmy Jean, chief economist at Desjardins Group. “And it’s only going to intensify in the coming years.”

“The risk you have, and in some sectors you’re already seeing it, is that people are leaving without there being enough younger workers to take over. So there’s a loss of human capital and knowledge.”

During the pandemic, retirements fell as many Canadians decided to stay in their jobs longer. With restrictions now lifted, many are rushing to make up for lost time, choosing to travel and spend more time with family.

Their departures are shrinking the labor force, which could weigh on economic growth at a time when the central bank is aggressively hiking interest rates to counter spiking inflation, fanning fears that the economy will fall into recession.

Canada – which has ramped up immigration to help drive economic growth – has the largest working-age population, as a percentage of the overall population, in the G7, but at the same time its labor force has never been older, according to Statscan. One in five workers in Canada is 55 or older. read more (Graphic: https://tmsnrt.rs/3RTcMyJ)

There were 307,000 Canadians in August who had left their job in order to retire at some point in the last year, up 31.8% from one year earlier and 12.5% higher than in August 2019, before the onset of the pandemic, Statscan said.

Adding to the problem, more than 620,000 Canadians entered the 65+ age category during the pandemic, a 9.7% increase in that population group. Despite three straight months of job losses, job vacancies and postings remain well above pre-pandemic levels.

The retirement problem is particularly dire in skilled fields like trades and nursing. Since May, Canada has lost 34,400 jobs in healthcare even as a record number of nurses reported working overtime hours.

Those were not jobs being cut, but rather people retiring, said Cathryn Hoy, president of the Ontario Nurses’ Association.

“It’s a huge problem right now, because we’ve had so many that have retired unexpectedly,” she said, citing the pandemic, working conditions and a wage dispute with Canada’s largest province.

The transportation industry is also grappling with a severe worker shortage, both because of the pandemic-driven frenzy for more goods and as the workforce ages.

At the same time, demand is booming from trucking companies, many of which take on student drivers for on-the-job training courses and then hire them outright as soon as they are fully licensed, said Reeder.

“Without trucks and people to drive trucks … goods will sit at ports and in warehouses as opposed to getting to the destination where they can be consumed,” he said.