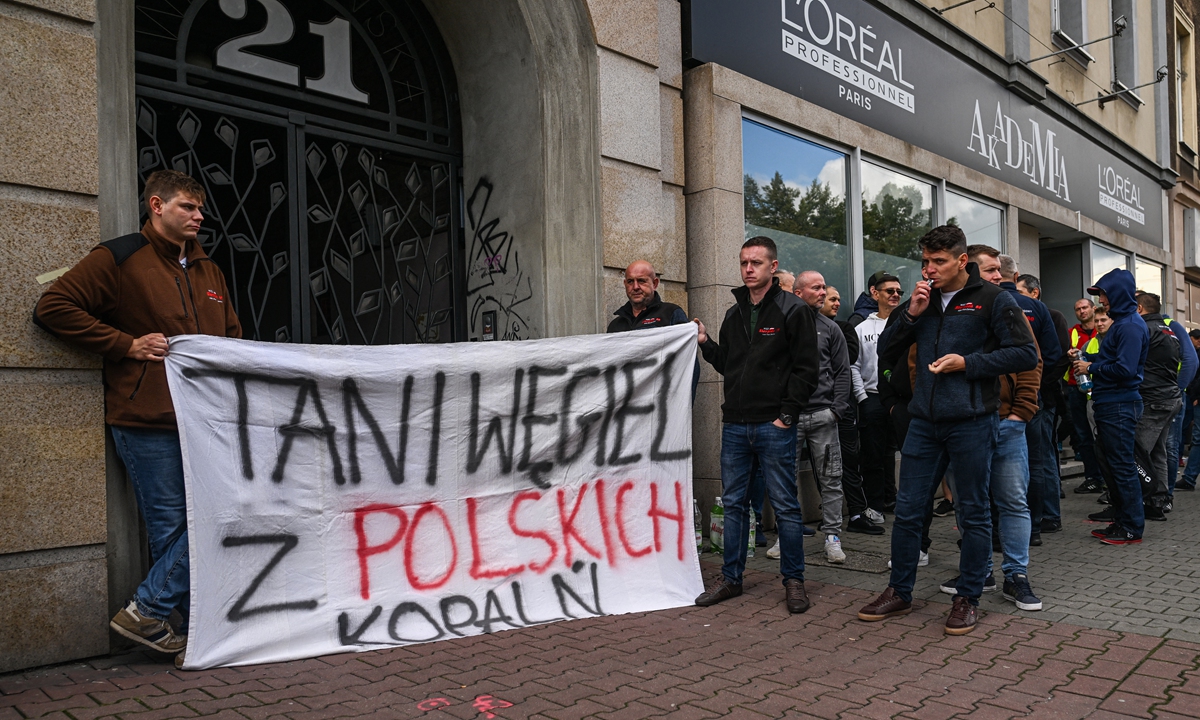 Polish coal miners hold flags to protest against the government’s energy policies in front of the prime minister’s parliamentary office in Katowice on September 12, 2022. Poland, one of the biggest coal producers in Europe, is now experiencing an energy price crisis. Photo: AFP

More and more European residents are taking to the streets to vent out their anger against the soaring energy prices and inflation, a result of European Union’s (EU) sanctions imposed on Russia. European officials are wrong-footed to find a solution, by proposing what Chinese experts described as “scratching the surface” solutions such as putting a cap on the revenue of non-gas energy producers and subsidizing household energy bills.

In the face of a once-in-decades energy crisis, European leaders seem to still prioritize politics and ideology over people’s lives and the economy by playing tough with Russia, and closely following the US, the upcoming bitter winter will be an ordeal for European leaders’ political wisdom, said experts.

Rising populism is another dangerous sign that has emerged coupled with the simmering protests in Europe, said experts, noting the third wave of populism in the continent may risk tearing apart the unity of the EU and gradually cause a bigger recession in Europe.

More and more protests erupted in European countries as people are angered by the soaring price of energy and government’s inability in tackling it.

Thousands of others convened in the German cities of Leipzig and Magdeburg last week, heeding calls by extremist parties to reprise the civil unrest that brought down East Germany’s communist dictatorship, according to US media outlet Politico.

“NATO has managed to do everything wrong in connection with Ukraine and Russia that one could do wrong,” said Gregor Gysi, the former leader of the European Left party, to enthusiastic applause in Leipzig.

Mario Salvatore, an Italian resident told the Global Times that the energy bills have increased at least five times in the past few months. “Some restaurants even light up candles at night to save money … We could have continued to live in peace, if we continued to buy from Russia what our economies need to thrive. Instead, we just had a burning summer, and we’re now preparing for a hot autumn and an even bitter winter, whose fault is it?” he said. Day-to-day existenceRussia announced last week that gas supplies would not be restored through the Nord Stream 1 pipeline until sanctions imposed after the Ukraine crisis were lifted. This has raised fears of a total cut-off of Russian gas.

A typical family in the EU could face energy bills of €500 per month by early next year without the introduction of price caps, according to Goldman Sachs Research published on Thursday – up 200 percent from 2021.

Samantha Dart, a senior energy strategist at Goldman Sachs, expects the real effects of the shutdown to still be ahead, especially for ordinary citizens. “This is a very painful process and it’s impacting the European population in many different ways,” she says. “Ordinary people haven’t even felt the full brunt of this situation.”

Yet the EU is struggling to reach a consensus on the solution. European Union energy ministers on Friday tasked Brussels with drafting proposals within a few days to cap the revenues of non-gas energy producers and help power firms stay afloat, rather than imposing a price cap on Russian gas, Reuters reported.

Russian President Vladimir Putin said days ago that Moscow would cut all supply to Europe if a price cap was applied on Russian gas.

A leaked document within the EU also reveals that the bloc’s executive wants a mandatory 5 percent reduction in electricity use in peak hours.

It is almost impossible for the EU to reach a consensus on how to solve the current energy crisis, as its Eastern European members rely more heavily on Russian gas and energy, Wang Yiwei, director of the Institute of International Affairs at the Renmin University of China, told the Global Times on Monday.

He also said that those proposals raised by European energy ministers are simply “scratching the surface,” as capping profits of non-gas energy producers and subsidizing household energy bills as many European politicians proposed neither open new resources of energy nor stimulate research and development of alternative energy. “The current measures adopted by the EU are simply using non-market methods as short-term solutions, which will eventually disrupt the market,” said Wang.

Experts warned that as the energy crisis is eating into Europe’s economy and people’s lives, governments’ hands are tied. “Europeans are now muddling through their days, the coming winter will be a crucial challenge for European countries,” Lin Boqiang, director of the China Center for Energy Economics Research at Xiamen University, told the Global Times.

Lin pointed out that the tit-for-tat conflict between Russia and Europe only has one winner— the US; “as the US eggs on Europe to take aggressive measures against Russia, and suffer from energy shortages as a result, the US is sparing no effort in selling gas and oil to Europe and making a lot of money,” said Lin.

The US sent nearly three quarters of all its liquefied natural gas to Europe in the first four months of 2022, with daily shipments to the region more than tripling from last year’s average, Bloomberg quoted the US Energy Information Administration as saying in June.

Europe will be the underdog during the Russia-Ukraine crisis; yet judging by European leaders’ reactions, they are still determined to further decouple from Russia, choosing politics and ideology over people’s lives and the economy, said Lin.

He believes the current energy crisis is a big challenge to European politicians’ wisdom, and it’s time for them to show a degree of autonomy from the US.

Chinese experts also warned that the current energy crisis is not only wreaking havoc on the continent’s economy, it could also breed political consequences, such as rising populism.

A diplomat from a Baltic country predicted Europe may face a fresh populist surge if leaders can’t rein in costs, Politico reported last week. “This might be the third wave of populism in recent times,” the media cited the diplomat as saying, referring to the financial crisis of 2008 and the migration crisis around 2014 as the two prior waves, and predicting this time could be the worst and have unpredictable consequences.

The election in Sweden this Sunday will be the first test of the political temperature in Europe, and EU officials are watching closely. With crime and cost-of-living issues front and center in the election campaign, Prime Minister Magdalena Andersson’s center-left government could be in trouble. And the far-right Sweden Democrats party, which has neo-Nazi roots, has a realistic shot of forming part of a right-wing government — a first for Sweden.

Italy’s general election will also be held later this month. Giorgia Meloni’s far-right Brothers of Italy party is leading the polls, prompting expectations of a right-wing government in Rome.

The rising populism in Europe will further tear apart the unity within the EU, and also disrupt ties between Brussels and Washington, said Wang. He warned that an EU that has suffered from a two-year COVID-19 lockdown, and now the worst energy crisis in decades, may be too fragile to take the blow of rising populism, which will eventually cause a big recession.